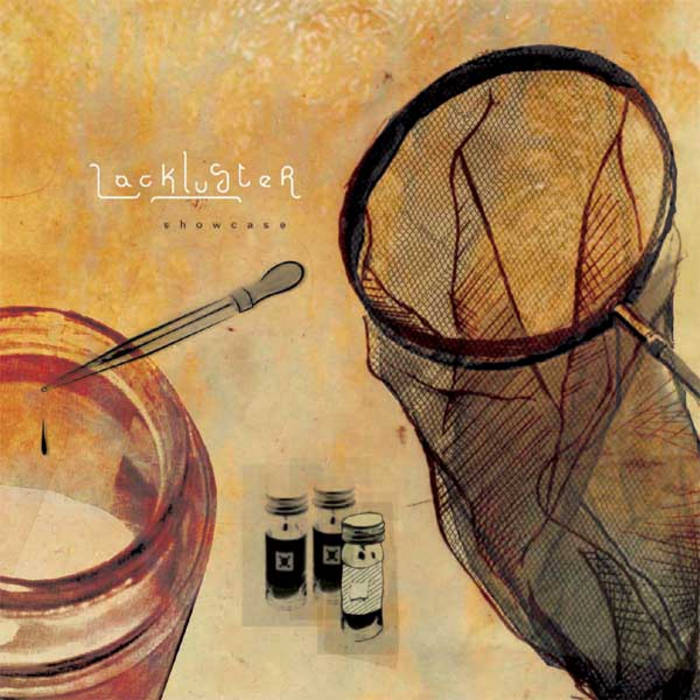 Available also on YouTube at www.youtube.com/watch?v=WGZ_uXMT-Uc&list=PLBSRel4LxRxctIKjwfCEFTqFtgGITW5gY - don't forget to subscribe to LacklusterOfficial (youtube.com/c/LacklusterOfficial)!
--
"Merck is proud to present the full length album, Showcase, from Finnish electronic music composer, Lackluster aka Esa Ruoho. Prior to this Lackluster has done two vinyl releases and few compilation visits on Merck, plus some remixes. Showcase is a stunning collection of Lackluster's tracks from 1999 to 2001. With nineteen tracks, it doesn't only fill in the gaps between his previous albums Container, Spaces and Wrapping, but also expands the familiar LL sound with hints of electro, techno and even house. Enjoy! LTD 1000"

Review date:
Tue, 10/05/2004
Finland's Eso ruoho is known for being on the mellow side of the IDM camp, with ambient, contemplative melodies gently flowing across earholes while downtempo beats shuffle assiduously in generally perfect electro step.
There are also amply rigorous rhythms that could inspire robotic movements across a particularly adventurous dancefloor. Fans of that style will not be disappointed with Showcase, as Ruoho chooses his atmospheres well, even if he doesn't exactly transcend the rigidly cautious boundaries determined by this cottage industry.

The seventh track, "Strateface," is especially infectious, sporting that bubblegum-funk Toytronic vibe. Because most of these songs are selections from previous releases on labels such as Rikos, Surgery, and DeFocus, there's considerably less filler to wade through than on some of his other full-lengths --most pieces seem to have been designed to be heavy hitters.

Ruoho is an above-average descendant of the general aesthetic handed down over the years from those seminal Artificial Intelligence compilations on Warp, playing carefully by the numbers.

Review date:
Fri, 03/05/2004
78 minutes of moody, crepuscular Techno, created in Helsinki by a man so confident in his own abilities that he chooses a name like Lackluster - hardly the most immediately appealing prospect in the history of recorded sound.

The artwork isn't particularly inviting either - meticulous drawings of a gloved hand dissecting a butterfly with a scalpel. But this selection, which gathers into one place pieces recorded by Esa Ruoho between 1999 and 2001 and released on various 7"s, 12"s and compilations released during that period, is shot through with sparks of imagination, suggesting that Ruoho's lowish profile, compared with fellow Finns like Brothomstates and Ovuca is undeserved, if altogether suprising. Lackluster's music is theoretically focused towards the dancefloor, but it's gloomy whispers and muted sparkles don't go out of their way to appeal to the 'hands in the air' brigade.

The more discerning, however, will find much to enjoy in the inventive rhythms and sweet clarity of Ruoho's melodic lines.

Review date:
Fri, 09/05/2003
Esa Juhani Ruoho, 26.10.1978, Finnish born and bred. The profile introducing Esa Ruoho, aka Lakluster, taken from the artist website, couldn’t more to the point. At just twenty-four, Ruoho is already a veteran of the electronic music scene, yet he has remained relatively unknown until now. This first release for American label Merck could well change everything. Already responsible for a string of remixes for artists such as Leafcutter John, Marumari or label mate Machinedrum, Ruoho has released four albums since 1999. With two albums for UK label defocus in two years and one for U-Cover, Ruoho is one of the most promising new artists to come out of Finland.
Ruoho’s interest for electronic sounds started at the tender age of six, when he developed an interest for the music of C64 and Amiga games. Progressively switching to ambient and the then almost-meaningful IDM movement during the mid-nineties, Ruoho released his first MP3s in 1998, with his first CDR album, simply called CDR#2 released on internet label Monotonik, before being snapped by deFocus for his next effort, Container, a year later. As more of his work started to appear on various compilations, Ruoho released two albums in 2001, one under his own name (Spaces – U-Cover) and his second for deFocus (Wrapping). Although Ruoho has collaborated with Merck in the past with a series of EPs, Showcase is his first full-length offer on the Miami-based label. Has its title indicates, this album showcases some of Ruoho’s work, in this particular case recorded between 1999 and 2001.
The striking thing with the nineteen compositions featured on this album is the wide range of sonic ambiences and genres, from the shapeless formation of interferences of the opening track, ironically called Tuneful to the classic electronica of the concluding track. Interestingly, there are a great number of untitled tracks here, simply identified by a date, a constant in Ruoho’s work pretty much since the early days. Sometimes associated with the seminal Artificial Intelligence series for his melodic approach to sonic environments, Eas Ruoho has certainly defined his own way of arranging beautiful soundscapes. Using relatively straightforward beat patterns as a basis for his compositions, he focuses on progressive sounds to create the primary structures of his creations, and then adds more subtle sources until each composition becomes utterly unique. From the hypnotic LL12 B3 Machine Drum and Haloaw to the sumptuous landscapes of LL7 07/05/00 and Mes, this album forever entertains and captivates.
Perfect introduction to the sound of Lackluster, Showcase offers an interesting overview of his work during his first two years as a recognised recording artist. If since, his sound has become slightly more ambient at times, it still retains the energy of these tracks. Esa Ruoho’s constant effort at creating beautiful soundscapes and arranging them in his own particular way pays off on this outstanding collection of classic electronica.

Review date:
Wed, 08/13/2003
Showcase collects Lackluster's singles from 1999 through 2001 into an uninterrupted expanse of shadowy electro dotted with shining synthpop pearls of melody. Darkly chiming and pretty - if a bit outdated - and predating the irony-laden electro explosion, Lackluster's tracks are disarmingly sincere. The track dated "07/10/99" is jaunty and percolating, while "28/06/00" is long and naively lovely.

Review date:
Tue, 07/08/2003
A more than aptly named album by the Lackluster and don’t get it wrong this is a share show of force. There’re 19 tracks ranging from world class electronica, to old-school sounding electronics and beyond. In the warm melodic vein of things the number two “LL7 01/10/00″, number fifteen “mes 19/10/99″ and number sixteen “11/11/99″ are all exceptional tracks. An interesting take on electro with a fairly harsh edge is number five “24/04/00″ or why not number fourteen “buzz”. With 19 tracks to choose from it just goes on and on and actually there’s something for everyone on the album. Produced by Lackluster between 1999-2001, compiled and released by those nice people at Merck.